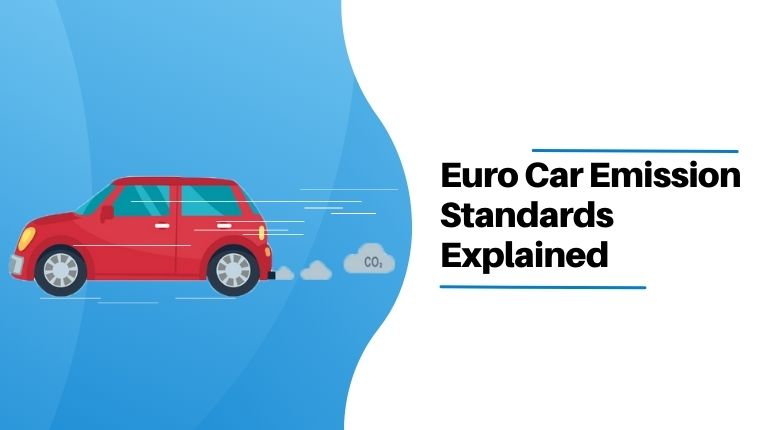 The primary way to trace the vehicle euro emission standards is through an online search, registration documents for new vehicles, and some cars on the door frame.

The reason for draining air quality in Europe is because of the air pollutant emissions from the transport. Thus, the euro emission standard is introduced to control the level of harmful emissions from the vehicles, mainly Nitrogen oxides (NOx), Carbon monoxide (CO), hydrocarbons (HC).

Emissions regulations started in 1970, known as Euro 1 but came into action during 1992 where catalytic converters become mandatory on new cars. It has developed into a series of emission standards from Euro 1 t Euro 6, and you can expect the Euro 7 before 2025.

The second reason is that if you drive within the regions with higher levels of pollution or like ULEZ areas, you have to know your vehicle Euro emission standards. Let’s get started.

“As per SMMT stats, the electric powertrains and efficient engines deliver -21.7% reductions in C02 emissions per average auto over the past decade.”

How does it start?

These emissions standards are applicable for petrol and diesel engines because they differ in emission rates. It rolled out based on current trend vehicles, to be precise; the vehicles manufactured date. The regulations become stricter over time, and limits for exhaust emissions are revised in the upcoming series.

However, the emissions of nitrogen oxides have not reduced as expected, and the reason can be driving conditions are often higher than the emissions rates are measured during the test.

The carbon monoxide emissions are at a very low level, and the particulate matter (PM) is virtually zero. This implies the reductions in Carbon dioxide are somewhat achieved, but it also depends on the climatic change.

“Replacing the older vehicles with the efficient cars by the latest lower emission ones is showing positive results to achieve the reduction of CO2 emission rates.”

Let’s start with the euro 1 emission standards to know your vehicle euro status and get an idea about what metrics it comes to effectiveness.

As already mentioned, it came into action in 1992 to reduce carbon monoxide required to move to unleaded petrol and the compulsory to fit the catalytic converters. Then, estimation of Euro 1 limit for both the petrol and diesel are:

It was implemented in January 1997 for all the new registrations in order to reduce the carbon monoxide and the combined limit of hydrocarbons and nitrogen oxide.

It was implemented in January 2000 for all new registrations. It eliminates the engine warm-up period and reduces the carbon monoxide & diesel particulate limits. The emission limits for petrol and diesel:

It was implemented in January 2005 with the motive to reduce particulate matter (PM) and oxides of nitrogen. Emissions limits for vehicles are:

It was implemented in September 2009 with strict limits on particulate emissions from diesel engines. Also, all diesel cars required particulate filters to meet the new requirements, and it applies to the new type of approvals from September 2011. For the first time, petrol engines have a particulate limit that is applicable to direct injection engines only.

Euro 6 standard imposes a further significant reduction in nitrogen oxides emissions from diesel engines and petrol engines. Euro 6 fitted with the lean NOx trap, which stores nitrogen oxide and reduces it to nitrogen over a catalyst.

Secondly, selective catalytic reduction (SCR) uses an additive containing urea injected into the exhaust to convert Nitrogen oxides into nitrogen and water that is expelled through the exhaust pipe.

The other method of meeting Euro 6 standards is Exhaust Gas Recirculation (EGR). A portion of exhaust gas is mixed with the intake air to lower the burning temperature. Based on the engine load or speed, the vehicle’s ECU controls the EGR.

Euro 6 emission standards affect the typical car owner. Based on the CO2 emissions and fuel type, the vehicle tax for cars registered on or after 1st March 2001. Diesel cars can pay less in tax when it meets the RDE2 standards for full Euro 6 compliance.

What does RDE mean?

The new cars’ Euro emissions standards can be found in the V5C registration document or obtained from the government site.

“The happy news is that people are adapting to new trends by moving to electric vehicles. Compared to the last two years, the plug-in vehicles registered in 2021 are higher and expect more in upcoming years.”

Nowadays, there are strict requirements for vehicle emissions when they take their vehicle for the MOT test.

During the test, if your car is fitted with the diesel particulate filter, which gives out visible smoke of any colour or any evidence that DPF has been tampered with, it automatically fails. Know-how actually MOT is tested here.

Are the same Euro emission standards applicable for the other vehicles?

Industry talks: The Society of Motor Manufacturers and Traders (SMMT) claims that 50 new cars today emit the same level of pollution as those cars built in the 1970s.

What does the Euro emission standard checker reveal?

When you intend to buy a used vehicle and the seller clarifies its full history, do you confirm it with the euro status? Yes, it is also an important metric to ensure the vehicle is within the emission standards.

Also, most vehicles are charged for ULEZ when it is under Euro 4 petrol or Euro 6 Diesel emission standards rather than their age.

Run our free car check report to provide the euro status check for your chosen vehicle. You can find these details and reveal the vehicle descriptions and performance including engine specifications to analyse the used car’s worth.